Alium is a side-scrolling action-adventure.

You take the role of a brave captain on a rescue mission visiting a mysterious planet.

It's inspired by SNES games such as Contra III and Metroid. It's my first game ever.

I hope you enjoy it.

If you decide to play through it (it's only about 10 minutes max), please leave some feedback on what you thought of it, and what areas could use improvement for my next game.

Anyway, thanks for taking a look :)

Simply download and run. Currently only supported on Windows. Use keyboard to control.

Well done on making a game!

I really liked the story and the opening scene was very well put together. However, the character felt "heavy" (if that makes sense). Also, the controls were difficult to use; I'd consider reallocating the keys.

The amount of content you put into this game in a short period of time is really impressive. I really enjoyed how the cave got darker the further you went through. I felt that the monsters were very hard to avoid. The biggest difficulty I had with the game is that I ran out off o2 and the player just laid there (I closed the game after that because i didn't know how to continue).

With all that being said, overall the game is very impressive and with a bit more time spent on it I think it could be awesome!

Reading back I sound quite negative, just to clarify I did enjoy the game a lot lol

Oh no, it's not that negative at all! All feedback is correct (very helpful and constructive even!), and I had established a similar picture myself.
I took all feedback from here to improve my my second game so I actually I want to thank you for taking the time to look at and play my game, and even give feedback to help me more :) it's the only way to truly improve.
Stay safe!

thats great! ill be sure to check out your other game when i get home today :)

The story is magnificent, although the controls are not entirely comfortable (At least according to my opinion) Good game!

Thanks! After this game I took some time to experiment with controls and how to make a game more juicy and fluent and stuff, so yeah, that's one of my biggest learning opportunities. Thanks a lot for taking the time to look at and play my game, and even give feedback :) Stay safe!

Pretty good! the controls seems to be a bit clunky, but i'm hoping that you might improve them in the future.

Thanks! Right now I’m experimenting a lot with game feel and user experience, so it’s literally on top of my to do list :)

Thank you very much for playing!

The "underground"-background could have more contrast with the ground. But the story is great.

Thanks for playing! I had some difficulty with the art, so I also learned, for example, that gradients are not the way to go for pixel art, but that's okay, I'm just glad I'm learning. Thanks a lot for your feedback! :) 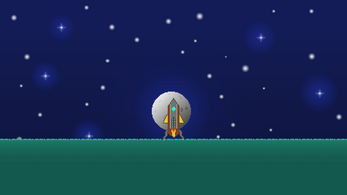